To Nature / To Self / To Things

I mentioned in a previous post that the first pair of boots I had bought on my own initiative was a pair of Timberlands. At that time, Caterpillar was still my favorite brand, but the former has now grown to take that spot. And so it was when I went to Japan last week and we went to Rinku Town’s Premium Outlets, my eyes grew big when my brother, who had browsed about the brands found there, told me there were Timbs there.

As I am not a true shopaholic, I asked my parents what made an outlet different. My mom said they were cheaper, true, but usually carried only the previous year’s styles et al. I found it logical; but not only that, I was pleased. My belief is that a truly fashionable item of clothing or pair of shoes will never go out of style; Timberland is known for this through their classic Yellow Boots. And it so happened that I was wearing my pair that trip.

I’ve wanted to buy a pair of Earthkeepers for a very long time – actually, since this sub-brand of Timberland first came out. I find it very socially responsible – and in fact, it seems to be sustainable: the shoes and boots under this line are made from recycled materials, hands down. What I do want to know, though, is how integrated this is into Timbs’s business model, to see for myself how sustainable it really is. But I digress.

Because a leather boot needs to have a plain toe design in addition to being a lace-up in order for me to like it, Timberland’s first Earthkeepers SKU, the “Original“, failed the test immediately with its moc-toe design. Its Rugged counterpart, however, seemed viable as a next purchase. In any case, I saw in the outlet store a pair of what was actually a newer Earthkeepers SKU, the Unlined Plain Toe Boot. The newer colors – which featured a differently-colored midsole – were more expensive, and in any case there was hardly any difference from the ones with the similarly-colored midsole. And the latter was at a huge discount. So I bought them. 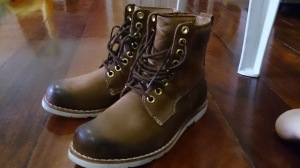 Actually, all of my Timberland purchases have always been with discounts. 😛 But I digress again.

I had narrowed my search in the shop to the Earthkeepers line only, which made things a lot easier as I would have otherwise been tempted to buy just a color variation of the Yellow Boot (and I’d be accused by my family half-mockingly, half-seriously of buying the same thing over and over – which they have a point in). But the first thing that struck me about this boot was its color scheme – it was a really cool-looking brown (red-brown, the receipt said) with a distressed color in the toe (which made it look ruggedly used, which I like) and white soles. The only white-soled boots I had prior to this were a pair of H&M synthetic leather boots I bought in Paris last autumn 2011, so I embraced this purchase as something I could use a lot.

And use a lot I did. Almost every day after we got back from Japan, I wore them to break them in (unlike my classics, which I sometimes wore loosely tied à la African-Americans, I didn’t think that would work with these – and these had eight holes as opposed to the classics’ seven), even driving in them several times. As far as style and comfort are concerned, they were flawless, the polished brown of the leather upper and the eye-catching white of the sole blending perfectly with my cuffed dark blue denims I wore everyday that week. They were even more comfortable than my Yellow Boots and even my Docs – and I should be severely disappointed if they were not.

For, even before I had started wearing them, I did research of my own to find out what the boots’ style name was (I didn’t take the box), and found the secret to their comfort: a pair of removable insoles (dubbed “Anti-Fatigue Technology”), made with (according to its official page) recycled plastic bottles. Double whoa: I never had a pair of removable insoles in any of my shoes before, but these also happened to be environmentally conscious!

My Yellow Boots are comfortable, but they weren’t as much so as the Earthkeepers. Furthermore, because my foot has no arch and is flat, the size 8 classics I bought seemed to be a little too large for me. My first Timbs were 7.5, but are now uncomfortably tight for me; ever since then, I bought size 8s with a few exceptions. Because I had bought my Earthkeepers at an outlet store, sizes were limited – this one was a 7.5 (there were no size 8s). But for some reason, they fit me perfectly – with allowance. So all was well.

So as is the case when the boots I’m wearing are particularly comfy, I made excuses to keep them on for longer, and felt a little sad when I finally had to take them off before going to retire for the night.

But that wasn’t the end. A few days later, the idea came to me to remove the insoles from the Earthkeepers and put them into my Yellow Boots, and see if there was any difference. Although I  had experimented a few days ago, I first wore them out today. 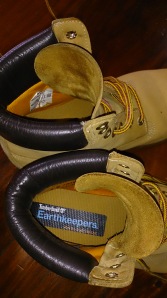 The change was dramatic; there was a world of difference. And it became apparent very quickly that I had hit two birds with one stone: the insoles not only made my older boots more comfortable, but the loose, oversized feeling was gone. It was perfect. I even felt taller; I think I am a little bit so, because the classics are a bit high in themselves, and the insole added about a quarter of an inch to that.

It did feel a little stuffy, though, but I think only because the weather today was indescribably hot, and I wore dark-colored socks.

But it didn’t stop me, and I already know that I will be looking forward to wearing my classic Timbs with this arrangement very often. In fact, I want to get for myself another pair of insoles so I don’t need to keep re-moving. Now if only my classic Timbs were also purely recycled…