As much as I can, I avoid food going to waste, though there are times when I can’t help it. In response, I try to learn some recipes that can help salvage those foodstuffs just at the tipping point (or near it) of expiration, overripeness, or rottenness. In fact, my previous post featuring ayran was partially the result of the need to finish the two pots of yogurt I bought exactly a week ago, due to expire on Sunday (but more of an irresistible, emotionally painful urge to make the heavenly drink). Last night’s pea risotto also used spring onions whose green had turned unpleasant, meaning they were only a day or two from becoming unpalatable.

This morning, the subject of my rescuing efforts is the humble apple, a fruit in our household since the dawn of time. Yesterday, I was told that there were two apples with what looked like rotten parts and needed to be eaten up already. As I normally do not eat fruits per se (except for blueberries), I immediately searched for apple recipes. Unfortunately, most of them featured ingredients I did not have, so I settled on one of my go-to fruit recipes: the crumble.

Crumble is a British dish, and naturally, I learned it from watching Nigella Express, where The Honourable Nigella Lawson uses a mixture of berries and thus calls it her jumbleberry crumble, jumbleberry being an old-fashioned English term for leftovers berries of all kinds made into jam. I, too, am using a jumbleberry mixture, but adding one crucial fruit: the apple.

The most common and at times only berry we have at home (besides bananas and tomatoes) is the grape. As a more readily available inspiration for Nigella’s iced berries with white chocolate limoncello sauce (a Nigellissima recipe), I had some grapes halved and then frozen. Ironically, I have yet to use it for the aforementioned; today’s breakfast, in fact, is the first time I am using them.

We also brought home strawberries we bought in Baguio last May; to preserve them further, I froze them all upon returning to Manila. Upon cooking, I slice in half the strawberries I use, so that they permeate in the dish more easily and evenly. 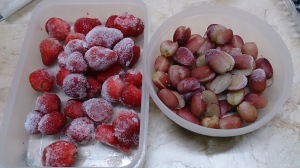 About once a month, my mother buys blueberries from her local fruit sellers; as much as I want to, we do not buy blueberries, blackberries, or raspberries in the supermarket as they are too expensive. Half of the blueberries immediately go into the freezer to serve as the basis for desserts and dishes like the crumble; the other half I consume directly or put into yogurt.

I also pre-made the crumble topping based on Nigella’s recipe, and froze it as directed, so that it can be ready any time for a crumble.

To ensure consistency, I laid out my fruits in my pie dish artfully – that is to say, I made the fruits spread evenly. I arranged my apple – cut into thin slices and not frozen but just refrigerated, as I was unsure of what would happen had I froze it – in a circle, and also put several in the center. I then dotted the apple blanket with blueberries, then my halved strawberries, and finally the halved grapes.

A fruity feast before me.

Because Nigella’s recipes measure crumbles in a 1¼ cups-sized cup or a small ramekin, and I had so much apple I had to use a larger pie dish, I simply estimated the amount of other ingredients I needed. I gauged that the pie dish was at least two cups in size, maybe 2½ cups, so I doubled the amounts instructed for the cup and simply poured enough crumble topping to layer the top of the entire dish.

The procedure is simply to add the sugar and cornstarch to the fruit and stir or shake the dish a little so that the powders scatter evenly. Then, the crumble topping is added. As it is a topping, I definitely did not put it in until after I had stirred my fruits.

I then popped this into an oven pre-heated to 425°F, and cooked it for twenty minutes. When it was finished, I added yogurt and coco nectar on top. I would have added ice cream (dessert for breakfast!) or plain cream, but I had neither; and anyway, I love the tanginess of yogurt mixed with the rich sweetness of honey or similar. The coco nectar is from a social enterprise based in Laguna, called Dr. Gerry’s, and is carried by Human Nature for a price of Php295.00 per bottle. However, it is woefully small at just 200 mL. 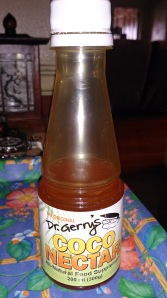 Since it was breakfast time, I also prepared what is now one of my favorite teas from TWG, the Singapore Breakfast Tea. It’s a blend of black and green tea, a first for me, and in doing this manages to both humble the sometimes excessive sharpness of the black tea and at the same time empower the sometimes too subtle taste of the green. It tastes exotic but familiar and comforting at the same time. 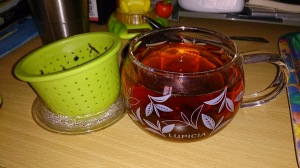 So I had a complete, homey breakfast-on-a-tray in front of me, that could be mistaken as a tray for afternoon tea. Hey, that sounds like a good idea for what to have for afternoon tea next time.

As I had previously made crumble with just blueberries, I was again a little apprehensive on the taste, especially after adding grapes (I know that apple crumble is actually quite common). I was not to be let down. It tasted exquisite, starting off with a rather simple and blunt taste at the start before rapidly crescendoing into a symphony of fruity flavors that are sweet, sour, and sharp at the same time in perfect harmony. The sharpness of the blueberries and strawberries were complemented by the juicy sweetness of the apples, while the grape added a hint of sophistication to the overall experience.

Perhaps it would not be a bad idea to add wine to it next time, if that’s the case.

And I felt full and relaxed, despite not having a solid base of carbohydrates.