It’s often said that breakfast is the most important meal of the day and must be the heaviest of all the meals, getting progressively lighter to end the day with a light supper, so that digestion is smooth as we go to bed. But sometimes, it can feel so draining when it comes to the morning meal, especially if one is a night owl and/or running late.

Currently, my only go-to breakfast is The Honourable Nigella Lawson’s Mexican scrambled eggs; my other breakfasts are either one-offs or irregular (like her Eggs in Purgatory, a heavenly molten lake of tomatoes, olive oil, chili, and garlic with a poached egg in between that is perfect for whenever one feels like hell – that’s her line, paraphrased by yours truly). So I try to expand my repertoire of foods in an attempt to spice up my life (pun unintended), and came up with… another breakfast recipe from the same book and series as the Mexican eggs.

Nigella describes it as California meets Tuscany, and it is simpler to make than even the scrambled eggs: You simply toast several pieces of bread, prepare an array of toppings, then apply them onto the toasted bread. Nigella used tomatoes, mashed chickpeas, and avocados; since I do not have the latter two but do have options to contemplate on, I took out two slices of Gardenia whole-wheat bread, and halved each. The package is shown below. 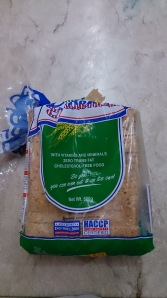 Given that Nigella used tomatoes, and it is my favorite fruit (or vegetable, depending on how you look at it), I, too, used one. However, I realized afterwards that one chopped-up tomato (and tomatoes grown here are small!) is perfect for one whole slice of bread already, so if you’re going to use half a slice of Gardenia, half a tomato is enough. I kept the seeds in, as did Nigella.

Scouring through our fridges, I found three other foodstuffs that eventually joined the tomato: a chopped-up spring onion; a Korean seasoned soybean paste called sunchang ssamjung; and, the grand finale… Greek yogurt. We always have spring onions at home for cooking and garnishing, especially on Italian and East Asian dishes. My brother, who is a food-a-holic even more than I am (and can afford much more to spend on pricier ingredients), bought the sunchang ssamjung alongside the spicy gochujang paste in either a Korean grocery (which is in abundance here in Manila) or in Korea itself when we went two years ago. 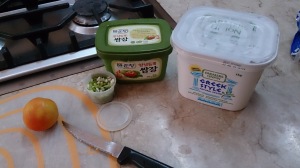 Greek yogurt is a recent discovery in my family. I stumbled upon it during a visit to Säntis in the Corinthian Hills clubhouse with my auntie, as she was buying yogurt for her groceries. I had just bought my own yogurt at Rustan’s Supermarket downstairs, the Nestlé Creamy Yogurt (plain flavor) but agreed to accompany her to Säntis, which is a Swiss delicatessen laden with goodies from all around Western Europe – cheeses from Switzerland, Germany, France, Italy, Spain, Denmark; wines and champagnes from France, Italy, and Switzerland; Swiss chocolates; and anything else that would be a dream come true for the cook.

I recommended to her my favorite yogurt brand, Emmi (a Swiss dairy brand from Lucerne), and looked for the large-sized tub of plain-flavored yogurt (they’re more known for their fruit-flavored ones). I was bitter at how the former was always out of stock when my eyes chanced upon a single serving-sized cup of Greek yogurt from the same brand, the first time I had ever seen it. Immediately, I seized one cup, and recommended to Auntie to get this, as it is healthier than regular yogurt by the fact that the little remaining fats in yogurt are also strained away when the yogurt is turned into Greek yogurt. It’s very thick, as such, and a lot more sour – and it is divine. Unfortunately, it is almost twice the price – but if you’d have to pay more money, you’d do it on healthy foods, and not junk foods like what I did when I was a child.

So anyway, I bought this brand of Greek yogurt, Farmers Union, an Australian company, at the supermarket. It’s supposedly all-natural, and comes in a hefty 1 kilogram container… for twice the price of regular yogurt. Painful, but I bought it anyway for good health’s sake. And this is what I dolloped over my fourth half of toast.

To make things even more delightful, I added coco nectar on top of the Greek yogurt. I also added extra-virgin olive oil on top of the tomatoes and spring onions. I didn’t add anything else to the sunchang ssamjung, but looking back, I realize I could have added sesame oil. It’s Asian and it’s healthy.

The extra-virgin olive oil I used this time was bought or given us earlier than the other bottle I generously sploshed over my Italian soups. Because its expiry date was last June, it was still all right, but I decided to use it up before the other one. One reason we overlooked it is because of its shape, which is both a blessing and a curse: the bottle is tall and thin, with a very long neck. It looks nice and very European, but it won’t fit in any of our shelves, so for a long time it was hidden at the back of everything else until I extricated it from there. 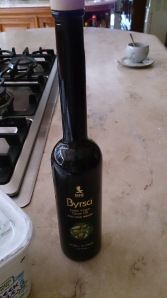 So at this point, I had four slices of bread with four different toppings, all but one baptized in their own liquids. Before I could start eating, though, I had to rush to the bathroom for my morning rituals. I did manage to take a quick picture of my beautiful platter before I hurried upstairs. 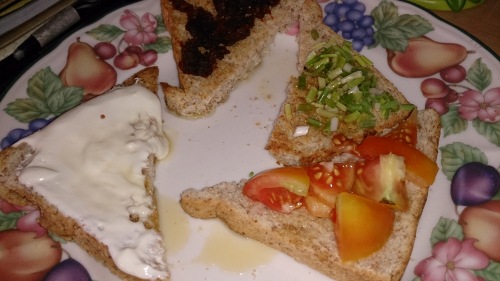 I intentionally reserved the yogurt bread for last, as it would be my “dessert”. I started with the spring onions for something comparatively light; the combination of tastes was awkward at first, but worked itself out – I think I should add more olive oil here, and maybe even balsamic vinegar.

I had the Korean bread next; the soybean paste, which I had never eaten before, was sharp-tasting but soothing at the same time, so it was a good combination that I am excited to try out again next time, but with sesame oil

Third came the tomatoes, but thanks to the extravagant amount of liquid on the loaf – both the juice of the tomatoes and the olive oil – it became very difficult to eat the bread by hand, as it started sagging and tearing itself off. I had to position it on the edge of my plate and hold it up in front of me while I bit into the bread. Of course, it was exquisite, thanks to the eternal partnership of tomatoes and olive oil.

Last up was the Greek yogurt, and it served to wrap up my meal too. Like the tomatoes, I had to hold up my plate and eat it from the edge as it was falling apart in my hands perhaps due to the sheer weight of the yogurt. Greek yogurt and honey is another marriage in food heaven; the sourness of the former is complemented smoothly by the sweetness of the latter, and in this case, the earthiness of the bread served as a solid foundation for the two flavors to dance on.

The result? One very satisfied and fulfilled boy amateur cook. I would definitely do it again – perhaps even for tomorrow’s breakfast! – and use the same toppings. But I’m also ready to experiment – for example, if I want fire, I could use chili garlic paste, gochujang paste, or even curry paste – which is a cool but intense fire. Or if I’m okay with eating something less nutritious for the body, and is commonly done here, I would put peanut butter and maybe innovate it with something else added on top. Hey, that sounds interesting.

One thing’s for sure, though: I’m excited for breakfast! To the kitchen!