Quite possibly my most favorite instant noodle soup of all time has to be the Uni-President Manhan Dacan Malaguo Niurou Mian (滿漢大餐麻辣鍋牛肉麵), or the Manchu Han Banquet Spicy Hotpot Beef Noodle Soup. A product of Taiwan, it’s the popular Taiwanese beef noodle soup that also ranks among my most favored noodle soups, spicy miso ramen from Japan being a top contender.

“Manchu Han” is the term given to what was one of Chinese cuisine’s largest banquets ever, in complete form Manhan Quanxi (滿漢全席), held on the 66th birthday of the  Qing Dynasty’s Kangxi Emperor to reconcile Manchu and Han factions struggling for power in imperial China. The banquet had 108 dishes from Manchu and Han culinary repertoires incorporating cooking techniques from all over China, spread out into 320 portions over three days. Today, the expression describes a significant feast and is widely used in the Chinese food industry for products, my favorite noodles notwithstanding. In fact, my late father’s cousins are the owners of the Mann Hann chain of casual dining Chinese restaurants here in Metro Manila, and despite my usual aversion for banquet-style Chinese food, Mann Hann is a restaurant I always return to for its simple yet sumptuous-tasting food.

Malaguo means spicy hotpot (literally “spicy pot”, hotpot in Chinese being 火鍋, or fire pot), so the noodles are a spicy beef noodle soup. It never fails to make my mouth water, and I always look forward to it. So on a recent vacation to Taipei, I bought a bowl of the instant noodles and never felt happier in eating it in our hotel. 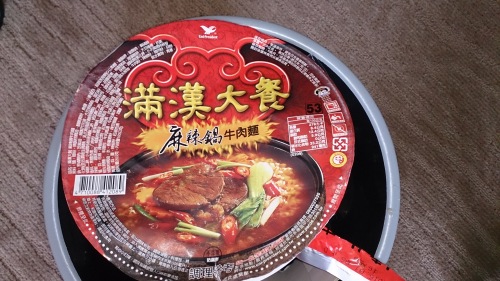 So when our Auntie Lily, who lives in Taiwan, came here last week, she bought me some of the noodles, as I had told her the story of my buying it and falling in love with it. She bought me the packet version that needs to be cooked, which is lighter and perhaps more healthful. It wasn’t as spicy as the bowl version though, but I loved it nonetheless.

The day after she arrived (she landed here in the middle of Typhoon Rammasum/Glenda, so her flight was delayed and she landed at almost 9 pm), during our blackout, we proceeded to cook brunch nonetheless. I cooked this, and gave some to my dihia to try, but he ultimately didn’t eat it. Today, little over a week later, I decided to use the leftovers for brunch. 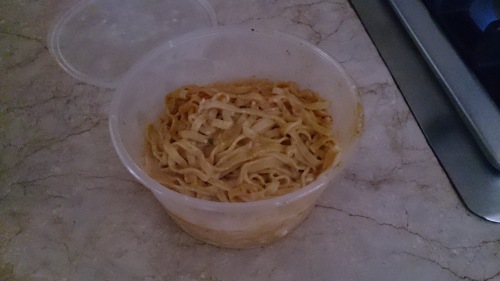 Anticipating that the amount of noodles would not be so plenty, I also got out some previously-cooked rice vermicelli Auntie Lily had used to make a noodle soup for our hospital-confined Auntie, Auntie Anita. A fair amount remained, so I used about half of it. Two different kinds of noodles in one soup may be weird, but it works for me, so I see no reason to complain.

The first thing I did was to heat up 1½ cups of water to boiling point, then I dunked the leftover beef noodle soup into it. Auntie Lily taught me to always poach an egg with instant noodles so that the egg helps complement the salty, waxy nature of instant noodles. As that had been done last week, my soup was now a pale gold, but thankfully not past the point of no return, which I found surprising given that I used egg.

I also then used a packet of Szechuan spicy noodle soup flavoring from MUJI. I had originally intended to use it with the accompanying noodles, but when I over-marinaded some pork with pork bulgogi marinade et al, and it became the soup itself (I did add a few other ingredients to make it taste better), I felt that adding the flavoring would ruin the experience, so I reserved it for another time. That time came now, unexpectedly.

When I had poured the burgundy substance into the soup and still noticed the soup was pale, I thought that the spicy flavor of the beef might already have diluted or been absorbed into the noodles. So I added ketchup, another trick taught me by Auntie Lily, who said it’s commonly done in Taiwan.

Lastly, to serve as garnish, I sprinkled my pot with half of a chopped-up leek, then after “cooking” it for a moment, I poured it into my stone bowl. In lieu of extra-virgin olive oil, I anointed my soup with sesame oil, which is supposedly healthful too (not to mention delicious), as well as Japanese sesame chili powder, and Japanese chili oil.

As expected, the soup was very mild, but at the same time promoted a cacophony of flavors that harmonized in the mouth: the salty sharpness of the beef with the sour sharpness of the tomato provided by the ketchup, the spiciness from the Szechuan soup base, and the nuttiness of the sesame oil. The noodles were overly soft by now, but that was all right with me: I didn’t need to chew as much, as if I were eating a different kind of porridge. The leek, of course, gave me that onion-y taste I so very much adore with Asian or Italian cooking.

And with the cold, rainy weather that has come to define the week’s climate, this is absolute heaven in the middle of it. I love cold weather and hot soup.

What’s your favorite instant noodle soup, and how would you cook it? 🙂