In my previous cooking-related – and Joy of Leftovers – post, I made peas with bacon as a vegetable side dish, committing to turn the other half into a leftover leftovers treat. I was supposed to do so last night, but an eleventh-hour affair meant I came home well past suppertime – without having eaten – and I resorted to filling myself with fried seaweed and cookies instead. Unhealthy and very irresponsible of me, and I tend to prioritize my meals after other matters… and this has got to change.

Keeping in mind that this dish will last only two days, I decided that I would have my peas with bacon innovation first meal in the morning. However, an equally dreadful sleeping habit means I sometimes unintentionally skip breakfast and turn my lunch into brunch – another habit we should kill if we want to live healthy lives. My green garden for today being no exception.

Nigella wrote in the side notes of this recipe that leftovers could be turned into a pasta dish or even a pasta soup. Given the relatively cool climate nowadays here in the Philippines – and my love affair with soups since time immemorial – I went with the latter, but decided to go with spaghetti, similar to my UCC-inspired  Italian chicken tomato soup spaghetti.

To save time, but not necessarily water and soap, I cooked the spaghetti separately, in its usual large pot with boiling water, duly salted. I used just half of the usual amount of pasta – 4 oz. down to 2 oz. – as I feared it wouldn’t become as soupy as I would like.

Once the pasta was ready – and this is where I did try to be responsible – instead of throwing down the starchy, semolina-laid water down the sink as we normally do, I got 1½ cups of it and used that as the water for the soup. The Nigella notes say that the “gravy” of the peas and bacon would itself serve as the broth base for the soup, but I went further. I would have liked to use our usual native chicken stock/soup, but since we didn’t have any, I used what has  recently become a household staple, and what I think (and hope) is a healthier choice: Knorr No-MSG chicken powder. 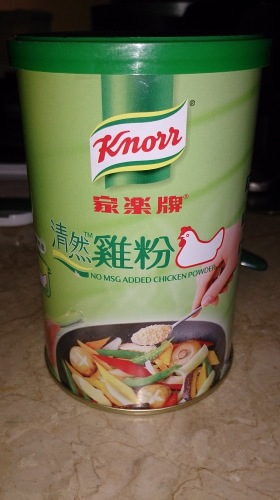 I also took out some rosemary and oregano, as well as my usual olive pomace oil. The latter was what I used to heat up my pan with and start reheating the peas and bacon. Right after, I poured my starchy pasta water in, then added the  rosemary and oregano. I waited for this to come to a boil.

When it already was, I mixed in my spaghetti, which had been set aside earlier, and stirred the whole thing for a short while before I decanted the pot o’ goodness to a bowl o’ goodness. Naturally, I anointed the surface with plain extra-virgin olive oil, but later added some chili-flavored extra-virgin olive oil, which had been sitting unknown in a cupboard for some time now and was actually past its prime.

Sometimes, we don’t want too heavy or rich a meal, and we want something light on both the tongue and the palate. My pasta soup was a case of the former, but not necessarily the latter, as this was still a primarily carbs dish. Call me ignorant if you will, but I was pleasantly surprised to see the soup was more colorful than I originally expected – even before I had put the EVOOs in. And yes, the soup tasted light but joyful.

As usual, I enjoyed scraping up more peas or spaghetti than bacon, so that I’d have more to eat on their own towards the end of the meal. It was a good brunch, and I look forward to creating more spaghetti soups in the future.