For an amateur cook with dreadfully little (or nonexistent) knowledge in the art and science of cooking (for it is both), it’s very gratifying to know that you can, at a moment’s notice, rustle up something in the kitchen using whatever you’ve got on hand, without relying on a cookbook, however beautiful and inspiring it is. It’s my own culinary flaw, as I rely too much on the writings of The Honourable Nigella Lawson and Giada de Laurentiis (and various recipes I spot on AllRecipes.com or  Pinterest), so I feel particularly joyful when it comes to me.

Last Thursday, I suddenly had the desire to cook an invigorating yet heartwarming bowl of Japanese noodle soup. My dihia (二哥) and ahso (阿嫂) – though I call her atsi (阿姐) because ahso sounds remarkably like aso, Tagalog for “dog” – had previously talked about making such, and my dihia, who loves to cook more than I do, said he would experiment when he could. Likewise.

The only ramen recipe I have is tantanmen (担々麺), which is also very Chinese in origin (ramen is; it comes from the Chinese 拉麵, “pulled noodles”) and consists of a peanut and miso base. Setting this aside, I got out the ingredients as shown below. 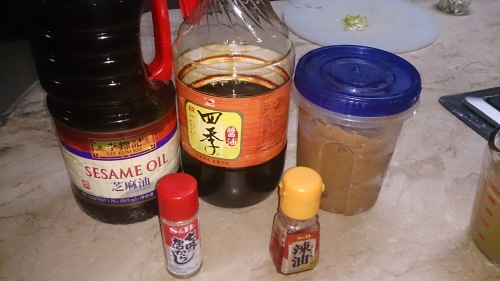 Sapporo is known for its miso ramen, and is one of my perennial favorites; it doesn’t taste like miso soup laden with noodles and vegetables, but something else more… tangy. So miso paste was first on the list. I also got out the equally-ubiquitous soy sauce, and some sesame oil, Japanese chili oil (辣油 rāyu), and a “seven-flavor” spice mix (七味唐がらし nanami tōgarashi). I had also gotten out some chili garlic paste (not in photo) and originally intended not to use it, preferring to be simpler in ingredients and flavor. However, I relented after I decided I was in need of a spicier base.

This was a fairly simple and straightforward experiment, a feeble-but-authentically-inspired attempt to do my own miso ramen. Ironically, we don’t have ramen at home, as they are more expensive than what we do have at home, rice vermicelli. 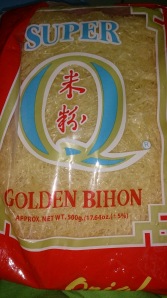 As is wont of the ramen dishes I eat, I had some ground pork prepared, too. You can use beef, and I prefer such, but we don’t buy beef for the house regularly. I would also have prepared leafy greens were it not for the fact that our fridge was deforested except for a chopped-up leek and some scallions, so those had to do.

The first thing I did was make the broth.

One step: Bung them in all in a pan and bring it to the boil before simmering. 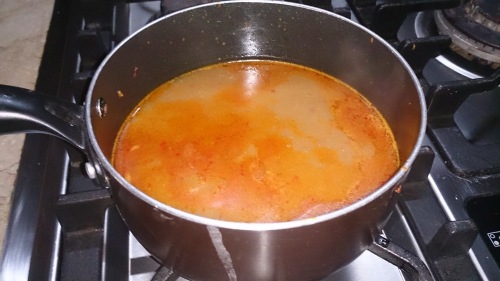 I realized, after this was all done, that I could have been more responsible in the sense that I could have cooked the soup and pork in just one pan, but I was so hasty that I made the broth already. The ideal plan would be to prepare the pork first, then pour the broth ingredients on top of it.

In any case, I had no choice but to get another pan to cook the pork and alliums.

In Nigella fashion, I heat the oil, then put my alliums in, then the minced meat. After it had sautéed for a few moments, I threw in the soy sauce, chili garlic paste, and some rice wine, to help the cooking process. After I continued to sauté this for a minute or two, I scraped everything into the simmering soup, and turned it back onto a boil.

At the same time, the noodles I had asked Manang to prepare were finished. To add another oft-seen ingredient, I asked her to hard-boil an egg for me, then chop it up lengthwise. I also retrieved my jar of Korean seaweed sitting in the fridge; we had no Japanese seaweed, so I had to make do. It’s good, anyway.

So it was simply a matter of assembling everything by that point: noodles underneath, broth-and-chunk mixture next, then the egg and seaweed. 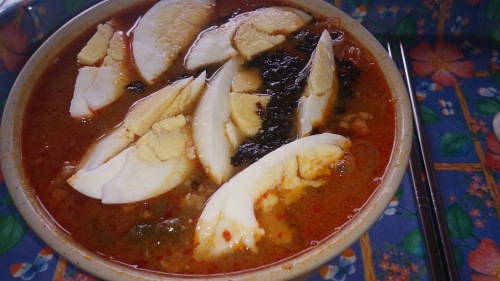 As I sat sipping the noodles and soup, I belatedly realized that I should’ve added sugar. Though it didn’t taste like it, it was apparently too salty for my palate, and I ended up having to force myself to eat it – which is not the point of eating. When I added half a tablespoon of brown sugar, however, the world rejoiced in my tongue, and I was able to resume eating it happily.

So that was a start. Definitely not perfect by any means, but then again, nothing ever is perfect; we’re continuously on an uphill climb for that state.

Already, I’m having ideas for the next noodle soup cookout-for-one…