Our high school physics classes would teach us that things tend to expand in heat, and contract in cold. (Remember that solids have rigidly-structured molecules, liquids have rather loosely-structured ones, and gases have almost free-flowing particles. And that solids turn into liquids, and liquids into gases, the higher the temperature.)

It may sound somewhat Ivory Tower-ish to one, but to another, it can spell the difference in accounting for long-term household expenses.

Imagine yourself cooking something on a stove that requires a lot of heat… let’s say sinigang (to those who don’t know, sinigang is a Filipino stew, usually tamarind-based, with vegetables and usually but not always meat) – our Manang‘s recipe calls for boiling radish and tomatoes in water for half an hour before adding the other veggies. That’s right, I said boiling, not simmering. So you can imagine that’s going to be one very hot pot.

In a house like ours where there is no warm or hot water from the taps, nor a dishwasher, we need to make a little change in adapting to dishwashing especially when it comes to our cookware. Today’s tip is to Never Immediately Wash a Hot Pan with Cold Water. Why? Simply put, it can ruin your pan much more quickly, and force you to end up spending more to keep buying replacements.

Here’s a slightly more technical explanation: the pan will warp, thereby not sitting flat on your stove, thereby causing potential problems in food and cooking safety. The food itself might also not cook as well as you’d want to, and you’d end up keeping the flame on longer.

More dangerous to your health, more expensive to the utility bills.

And for the most technical explanation: The cold water, upon rushing in on the still-hot pan where the molecules are still expanded, will make them contract suddenly and abruptly. As we all know, in life, sudden things usually cause chaos. Same goes for the pan – the contraction of molecules is so inorganic that it won’t be done correctly. On the life-sized scale, this manifests as warping.

Before cooking, the molecules of the pan – a solid – are arranged rigidly and orderly.

While cooking, due to heat, the molecules begin to expand. This results in an overall minute – but existent – expansion of the metal. 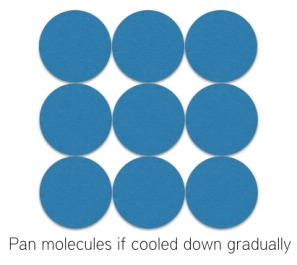 After cooking, when cooled down gradually, the molecules will return to their original structure.

However, if the cooling down is abrupt (such as a sudden flow of cold water), the molecules’ movement is disturbed, creating an improper arrangement. This results in the metal warping.

This applies to all kinds of metals, so the material your pan is made of is immaterial (pun unintended). And it’s one specific way of taking good care of your things, and one that can easily be done at home.

Again, if your sinks have hot water, then all you have to do to take care of your pans is to wash them in warm water with your dishwashing soap. But if not, then we take the small sacrifice of leaving the pan to cool on the heat diffuser on the stove before we send them to take a plunge.

Follow this simple but crucial tip, and your pans will last for years and still whip up something uniformly delicious for you and your family.