The Market / To Nature / To Self

I’m sure we most of us have had the experience, at least once, of having a packed lunch (or a packed breakfast or supper, for that matter). When I was still a prep student, around half of us in class brought our own food to school, and they came in different forms and shapes. I used to have the extra-bulky but very utilitarian Zojirushi vacuum jar, and it was only when I’d long stopped using it that I appreciated it (at the time, I was wondering why my lunchbox didn’t look like a typical lunchbox; in fact, it was a lunch bag).

As a young adult, my need for packed lunch still manifests occasionally, but thankfully in more aesthetically-friendly manners. As for ergonomics, well, it’s both more ergonomic and less ergonomic because although it’s no longer vacuum-sealed, it’s a lot more.

Welcoming our guest for tonight, Sistema’s Salad To Go lunchbox. 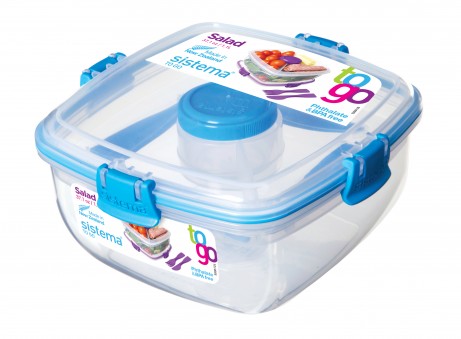 For the über-organized eater, this particular Sistema product is a godsend. First of all, though, I want to explain what Sistema is all about, before I talk about this product. I’ve mentioned Sistema in several posts before – among others, this one and this one. The former, in fact, features my usage of this exact same Sistema salad bowl, and you’ll see in a bit why it’s my favorite (meaning, it’s the one I chose to feature).

Sistema, or Sistema Plastics in full, is a New Zealand company. Its name is Italian for “system”, which is the root of the Sistema vision: a beautiful and safe quality food container that was also stackable. From its humble home garage roots, three decades later, Sistema exports to 62 countries and has millions of customers. Besides food storage, they’ve also ventured into home storage and gardening materials.

The USP (for that was how I first came across it), or at least part of it, is the “safe” part: all Sistema products are BPA-free. I’ve also mentioned BPA before: full name bisphenol-A, it is a carbon-based synthetic compound used in plastic manufacture. It is also toxic to our health.

As such, given the safety of Sistema’s products, they are microwave-, freezer-, and dishwasher-safe. They’re not spillproof, which is a down for me, but not much of a down compared to all the other benefits. 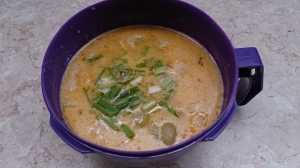 Sistema Products are safe for the microwave, freezer, and dishwasher. 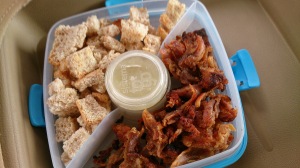 Now, on to the Sistema Salad To Go. This particular model has a capacity of 1.1 liters, hence its full name of 1.1L Salad To Go. As I mentioned, it is a godsend for über-organized eaters. What I like about it, besides the aforementioned Sistema-wide features, is that it has compartments and even a small jar in the center, designed as for the salad dressing. As it is a salad bowl, furthermore, the two triangular compartment halves would serve for the salad components, such as grapes and olives, while the main compartment would hold the leaves. But since when did we have to conform so much and not use our imagination, or think out of the box? As it is, it can be used for any lunch you have, especially those with separate snacks or viands, like a reimagined bento box (the little jar in the middle can hold your sauce). And that’s not the only thing, because of the inclusion of… 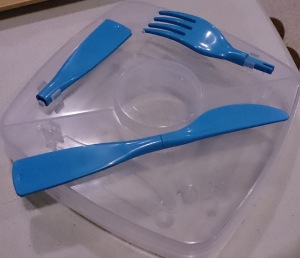 …a fork and knife! These utensils are clipped on to the bottom of the top compartments, and can be assembled and disassembled at will. When I first started using it, some parts were prone to falling into the food, but now they don’t. The only issue I have is that they are stored right above the food, and can get oily or “soiled” even before you take them out. Again, compared to the benefits, this is nothing.

As I mentioned, the Sistema Salad To Go is both a plus and a minus over my bulky Zojirushis, because although it comes with all these nifty features (not to mention it is lightweight and stackable), it is not vacuum-sealed. This is easily remedied, however, by placing it in an insulated bag – if you don’t have one, Sistema does.

The first Sistema products I bought, influenced by my 二哥 (who introduced them to me), were the 656ml Soup Mug To Go and the 940ml Noodle Bowl To Go. He also bought many more I like also, such as the 1 Litre Round (useful for pistachios). But none charms me so much as the 1.1L Salad To Go with its features. If there was one Sistema food container to buy, I’d recommend this.

The Sistema 1.1L Salad To Go is available on Amazon for US$8.21 as of this writing. It is also available in SM department stores and Shopwise.