As we take the time today to remember the Institution of the Eucharist by Our Lord Jesus Christ during the Last Supper, I would also like to make a very special and joyful announcement. 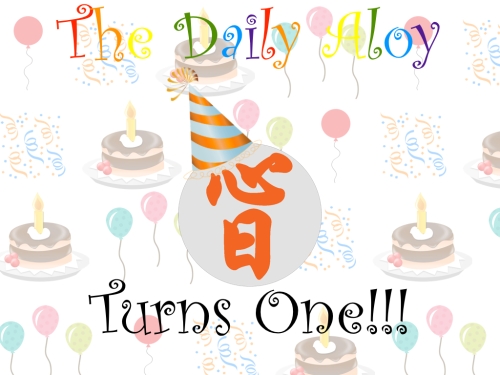 I have been blogging for far more than a year. On 19 February 2014, I got serious and decided to put all my then-existing blogs together and create one full site. That site is The Daily Aloy. But it was only on 2 April 2014 when I published the first post to TDA as a TDA post, and as such we shall celebrate TDA’s birthday every 2 April. (That post, by the way, is “Fashion and Life: Standing Out (Part One)“.)

Though my readership has been and remains a very modest amount today, I am not without thanks, for the mere fact that even just one person has decided to follow me means I have made an impact on someone. Over fifty is thus a huge blessing already, and for that I say thank you. Thank you to my readers and commenters, who still stick with me even during my periods of dormancy. Thank you for taking your time to view and like the posts, which I hope have been very insightful in your efforts to live the CSR lifestyle.

The call to live an ethical, conscious, and responsible life is not new. Since Biblical times, perfected in and by the coming of Christ, there has always been the invitation – command, even – to live a life of devotion to God, not just in thought and speech but in action and in deed. We are called to follow not – or not just – our own wills and desires, but to place that of God’s, the Father’s, above our own. We are called to love the Lord our God and to love our neighbors as we would love ourselves – to feed the hungry and thirsty, clothe the naked, shelter the homeless and the traveler, free the imprisoned… whatever we do for the least of our brothers and sisters we do to the Lord Himself.

But throughout history, developments in science, in technology, in systems, and in cross-cultural interaction have led this to take a backseat unceremoniously. (Yes, globalization, approached the wrong way, also has its flaws.) The quest for temporal power and self-fulfillment has led man to forget that there is an almighty God of majesty and glory – but most importantly of love and compassion. Leaders have become arrogant and self-centered, forgetting their responsibilities towards their people and their God. Most of the conflicts throughout history would have been avoided – and deaths spared, development not brought to a halt – if everyone accepted the eternal teachings of love, justice, and peace – whatever their religion or faith. There are certain eternal principles that transcend religions and cultures, which are manmade anyway – these principles are those promoted and practiced by the Supreme God.

It is good that, today, many people, the youth especially, are searching for meaning in their lives beyond merely a stable job, consumerism, injustices around the world, and the threat of environmental disaster. These are the people who will shape the future for the better, to put history’s foolish mistakes behind it and bring humanity back to God. I salute them and pray for them.

As The Daily Aloy marks this milestone in its life, I pray, too, that with your, my good readers’, support, we, too, can turn The Daily Aloy into a force capable of joining the many others who are calling others to call others for a life of truly ethical, conscious, responsible, sustainable, Christian living.

Thank you so much, again! I am truly blessed to have you! 🙂