This is a two-part article. Click here for Part 1. 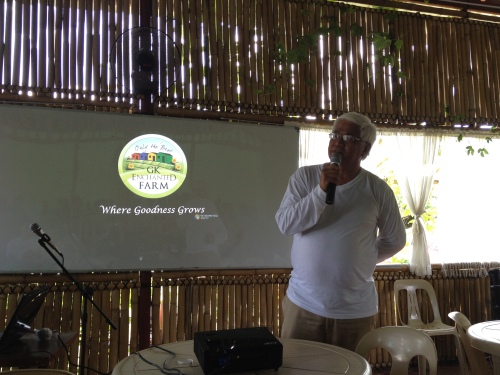 The Oxford Dictionary defines PC (as “political correctitude”) as “the avoidance of forms of expression or action that are perceived to exclude, marginalize, or insult groups of people who are socially disadvantaged or discriminated against”. In my opinion, it is sometimes logical – it is absurd for a woman to call herself a foreman or chairman. How can a group of both men and women in the police force be collectively referred to as “policemen”?

But I also wrote previously about the need to practice moderation, and of excellence over perfection. Meaning, society runs the risk of being too serious or of overusing PC – and one way this is done is when words are taken out of context or not understood within the overall context of a writing, and when rash and uninformed judgment is made.

For one, Tony Meloto is a Filipino who has been living in the Philippines all of his life. Two, he always employs humor to lighten things up. Three, he is utterly passionate about and dreams of an inclusive First World Philippines where everyone is free from poverty – remember, he is a visionary. As such, to engage Tony Meloto as a symbol of something he devotes his entire life to is also to engage Tony Meloto as Tony Meloto – to know how he thinks, how he acts, how he feels given his background. I will agree, therefore, that UH-CPS took Tito Tony’s words out of context – the same way eisegesis does.

However, these are Filipino-Americans, and Tito was in the country that championed campaigning for human rights, for fairness, et cetera. Those who know me know that I run on principles and values, and that I will never compromise them even if it means pleasing someone else. The way I know Tito Tony, he is also like this: his principles of love of country, of caring for those not cared for. But I personally think that it is still completely possible to stand by your principles while at the same time temper somewhat your actions to give respect to people different from you. That is the magic of true globalization and multicultural cooperation. In this case, perhaps the GK team, conscious of the fact that Americans think differently from Filipinos (and neither is superior to the other), would have agreed with Tito Tony to take care of his humor – Filipino humor can be sometimes a little brash, though I and people alongside me personally find nothing wrong with it.

One builder, not the one builder

I also noticed how some commenters sided with Tito Tony simply because of what he has done through GK and through his personal humanitarianism – a few even fired back at the critics asking  them if they have already seen a GK village (or the GK farm).

I have already said that I believe Tito Tony’s words were taken out of context. However, let us pretend that he WAS being sexist, elitist, and misogynist. The logic would be as follows: Due to the extraordinary nature of what he has done, his faults are essentially condoned and no one advises him about such kind of behavior. This sounds very familiar, what with the current chaotic political scene of the Philippines. So we are allowing bad behavior to go rampant, are we?

As I said, Tito Tony is my idol, and I am all for the work of Gawad Kalinga and the Enchanted Farm. But however much GK is a key player in the social development movement in the Philippines, I think it sometimes has the tendency to display self-serving behavior even when the context doesn’t call for it – such as the aforementioned incidences of supporters judging others by the level of their exposure to a GK initiative. Yes, GK intends to and has made a big difference in the country, and I personally know people all across the spectrum whose lives were transformed for the better, forever, by GK. But it is never a reason for GK to lose humility, which it sometimes inadvertently does (though I’m certain no one there intends that).

Even models of goodness are not perfect and need to undergo constant self-evaluation and learning. Particularly if you’re a leader or a public figure. No one is perfect except God, and one needs to be conscious about this all the time. I salute Tito Tony for accepting and respecting that there will always be those who will not agree with or be offended by him, and for learning that social media can be and is a great force of influence.

Now, as for UH-CPS, I agree with the commenters who slammed their report. It is quite surprising how a group of supposedly distinguished academics – brilliant individuals who should of all people be well-versed in social grace and niceties – have utterly mishandled things and turned them into a fiasco. Unless they intended to ruin GK’s or Tito Tony’s reputation at their expense.

For one, it took 45 days from Tito Tony’s speech before they released their first-ever statement. There was not even a single reaction in that interim time – and it would thus be understandable, given the immediate overwhelmingly positive feedback that Tito Tony received, for him to be completely shocked and antagonized by such statement.

For another, no one even signed the document containing the statement, while Tito Tony signed his. The CPS leaders claim this is a collective statement from them, but it reeks of a desire to remain anonymous in order to avoid any negative reactions – violent or not – aimed specifically at them. This implies that the members of the committee who “unanimously agreed” on what was written are not brave enough to own up to the responsibilities that would ensue from their writing.

And, most importantly, it was sheer unprofessionalism how the statement was released on social media with no prior communication whatsoever. Social media is a powerful tool today, and I am sure UH-CPS was aware of this. Therefore, I think it more likely that they wanted to hurt Tito Tony by releasing their damning statement without warning to the entire Internet, where stuff never truly goes away. This, for me, is plain cruelty and meanness. The most academic way to go about things would have been to write to Tito Tony with constructive feedback about his speech, and allow for a diplomatic, learnings-filled, and friendly exchange of sentiments between the two parties. Instead, this supposedly prestigious university’s center did what a vengeful, immature child would do.

Many commenters believe that Tito Tony was not sensitive to other people and should simply apologize for unintentionally hurting them. But I tell them that Tito Tony already has apologized: He stated that he understands and accepts that there will be people who would disagree with him or not understand (or be turned off by) his humor or views.

Tito Tony has his own views, his own flaws, his own strengths – as any other person does. Being someone who believes in innate human dignity, Tito Tony would understand this of every person, and he would even respect it. That in itself is better than an apology, and an invitation to build bridges to connect people of different backgrounds.

Now, both Gawad Kalinga and the University of Hawaii are in the spotlight, and in things like this, there is no real winner – only losers. Unnecessary energy and time are spent on fixing things when they could have been spent on so much more good things. Both organizations suffer a reputation disorder among the public whatsoever because both sides have supporters and detractors.

All because of a misunderstanding and a dreadfully-handled reaction.

I know both GK and UH are more than this. That both have their own unlimited potentials to do good in society and the world.

Now, I and the rest of the world remind them to focus on that.