As you know, today is Market Thursday, where we feature an interesting (from the responsibility point of view at least) product, service, or startup that I would happily endorse given the authority. Today, however, we will be taking a different approach to things: I will not be featuring any specific product, service, or startup – but I will be inviting you, nonetheless, to make sure you have your own.

At first glance it might seem obvious, but you do might take it for granted – I used to. There are many things in life, especially nowadays, that are good, simple, and seemingly done by everyone – but it isn’t always the case. So, better safe than sorry. 😉 Anyway.

What I would like to invite everyone passing through this blog – all the Christians, at least – to get is their own Bible – their own copy of Christian Sacred Scripture. 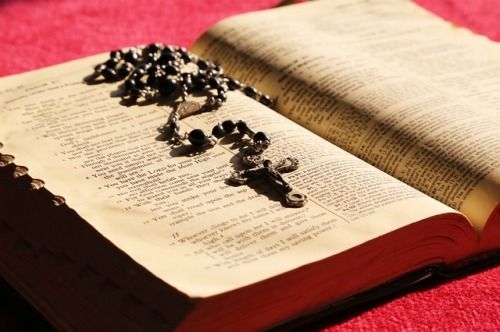 As I mentioned the other day, The Daily Aloy is not strictly speaking a Christian site. But it does contain lots of Christian overtones, because part of the advocacy of this site is rooted in faith and service driven by such. Being a proud Roman Catholic, it’s but natural that the faith I would be writing about is the Christian one. However, neither I nor TDA is exclusivist: as long as you are truly seeking God no matter your faith, and doing so in the spirit of true service and love, you have a place in the TDA community.

But, nonetheless, I will be asking for non-Christians’ forgiveness that I am writing about Christian topics or pepper my articles with Christian theology or belief. I do believe, however, that you can greatly enrich our discussion through the comments thread below.

Now, back to the main point of today’s post. I firmly believe that every Christian should know their Scripture. I understand that it was only recently (the mid-20th century) that the Catholic Church has started openly encouraging the faithful to read and study the Bible – previously, their Scriptural knowledge was limited to Mass lectionaries. This is one gift, I believe, that Protestants presented to the world and that the older Churches have learned from. Even the Popes have written encyclicals encouraging Biblical translations from the original Hebrew, Aramaic, and Greek (previously, the chief source was the Latin Vulgate by St. Jerome) as well as essentially promoting formal equivalence over dynamic. This is good.

The Bible as the written Word forms one half of God’s Word to humanity, the other half being the oral (or unwritten) Word that can be found in sacred Tradition (note the capital “T”; this is different from traditions that have flourished in the Church since then). Being the written Word, the Bible is more tangible (the Church’s teachings are interpretations of the two types of Word) and thus more accessible to us thanks to Gutenberg (and the first book ever made with movable printing was a Bible!).

It makes sense, therefore, to know as much of it as possible – to allow the Word of God to permeate every fabric of our lives as much as it can. Meditating on His Word – in this case, the written Word – would work wonders in your spiritual life and growth. Lectio Divina, the ancient technique of reading, meditating, praying, and contemplating the Scriptures, is one good way of understanding the essence of the message of God for us.

That being said, I believe that every responsible Christian should have their own Bible. I say “their own Bible” – a Bible that they have made real (cf. The Velveteen Rabbit) into their own lives. It is not just any Bible given them by a devout parent or relative, but a Bible that they choose to immerse themselves in, to read not just mechanically but integrally and wholeheartedly. As such, it is not my right nor my authority to impose what Bible translation or edition to get – but I do have a few pointers. Four, to be exact.

That said, if you were to ask me which English-language translation of the Bible to get, I would recommend the Revised Standard Version 2nd Catholic Edition (RSV-2CE), the New Revised Standard Version Catholic Edition (NRSV-CE), or the New American Bible Revised Edition (NABRE). To my belief, after researching carefully, these three translations are the most literal and up-to-date English Catholic Bibles available today. Furthermore, the RSV and NRSV are descendants of the King James Version (KJV), which has established a reputation not only in English Christianity but in English literature as well – and also comes in an edition with the deuterocanonical books, albeit wrongly termed the Apocrypha.

Incidentally, today Muslims observe Eid al-Fitr, the end of their holy month of Ramadan. It’s a non-working holiday on Friday, 17 July, in the Philippines.

Have a purposeful and blessed week!

I’d like to thank the blog Catholic Bibles for inspiring me to get to know my Bible better and kindle my Bible-philia.