Service / To Others / To Society

Key Takeaway: I firmly believe that all religions are simply different cultures’ ways to commune with the One God. But more importantly, I also believe that these different systems should not serve as barriers, but rather as opportunities for dialogue, mutual support, cooperation, and moving forward together in the name of higher purpose.

Today is a very special day for me.

And since it’s a special day, I’d like to talk about something that is very close to my heart – something that I have not been very vocal on until quite recently. Precisely because my views on it have been constantly evolving as I try to learn and learn.

I want to talk about faith and religion – or rather, how inter-faith and inter-religious dialogue and cooperation can and should work together for individual members of society to commune together in living out their higher purposes, rooted in awareness and service.

Twenty-four years ago to this day, I was born – and raised – Roman Catholic. Not that we were a Christian household – we were actually an inter-religious one! Both of my parents are hybrid Catholic Taoist, with my father having had a more balanced mix while my mother is more Taoist. My two brothers, in part due to their education, are Protestants (as well as my ahia‘s [eldest brother’s] entire family). When I was younger, I was religiously influenced by both my mother and my dihia [second-eldest brother], the former teaching me to light incense and pray to her traditional Chinese gods and boddhisatvas, the latter giving me things such as children’s Bibles.

I went to Catholic schools all my life, and I also underwent First Communion and Confirmation (unlike my nephew, who was really raised Protestant and thus did not undergo First Communion – he attends the same school I did). But because there was no real strong sense of prayer or religious living as a family due to our inter-religious existence, I never attended church (except for school Masses, weddings, and funerals) for the first twenty-three years of my life, and I never really developed a serious habit of prayer – or of Christian living, in general.

Three events (if you could call it that – I call it more of one event and two arcs) convinced me to strengthen my Catholic faith: my high school retreat that taught me to have a personal relationship with Christ; my Catholic theology classes in university (also a Catholic school!) – though do well I did not; and a faith crisis early this year that led me to study – and thereby grow – my faith more deeply. Hence, I can now say that I am a practicing Catholic by choice.

Does it matter? To me, yes, it deeply matters – and perhaps to the rest of the billion-plus Catholics over the world. But is it the only thing that matters? I think not.

“…this commandment for everyone to do good, I think, is a beautiful path towards peace. If we, each doing our own part, do good to others, if we meet there, doing good, and we go slowly, gently, little by little, we will make that culture of encounter that so much. We must meet one another doing good. ‘But I don’t believe, Father, I am an atheist!’ But do good: we will meet one another there.” -Pope Francis

I apparently inherited a certain belief from my mother (I discovered she shared it only recently) that was also shaped by my first theology professor, and I firmly believe in it:

I believe in God, and that all religions are different societies’ own ways – shaped by their cultural practices and beliefs – of communing with him. Even non-believers.

As a Catholic who has studied my faith more deeply, I believe that to be Catholic is to embark on the “straightest” way to heaven. But by no means is it the only way to heaven. All paths lead to heaven – at least those paths that are about doing good (for there can be, and are, paths that are about not doing good). And because of this, there is so much we can all touch on together.

In the 5th Philippine Conference on Research in CSR last 28 September 2015, Asec. Luis Cruz, who is in charge of ASEAN affairs for the Philippines’ Department of Foreign Affairs, spoke that personal social responsibility has a lot of potential to play a huge role in international cooperation, and one way of doing so would be to respect and work with diversity. In the ASEAN, religion and culture play a huge part in this, given that Southeast Asia has a mélange of Christians, Muslims, Buddhists, and Hindus, among others.

Sadly, as we know it too painfully, today there are religions seem to be barriers rather than opportunities for dialogue and working together. This is what happens when they are too strict, conservative, or intolerant – and in a world of globalization, this has to go. We citizens have an obligation to mingle with and accommodate the world around us – and if we view our beliefs as opportunities, we can even teach others about the wonders of our own beliefs and faiths. But again, keep it in moderation: we do it through love and true charity, rather than through force and intimidation.

All religions around the world are religions for a common purpose: they all teach us to do good. What “good” this is is shaped by their cultural beliefs of what “good” is, but they are all basically the same: to show genuine love for others, to be less selfish and more selfless for others and the world around you, to commune together in unity for a common goal that is beyond us all. Christians call this the Great Commandment, Buddhists follow the Four Noble Truths, and so on… but they all have the same central and end purpose.

As Pope Francis said, we must all do good, and that would enable us to meet “there”. Even non-believers: all of us are called to do good, and all of us can work together to do this good. So to serve as food for thought and a little laugh to close another working week, here’s a meme I came across on a site called Catholic Memes: 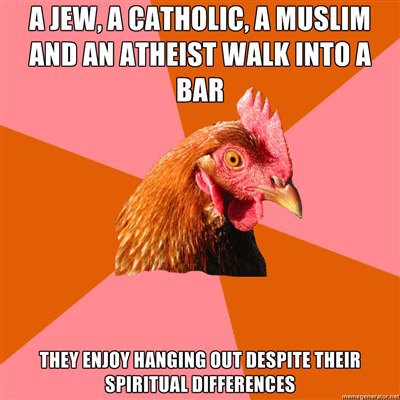 Have a purposeful weekend!