The Daily You is shocked and saddened to hear of the bombing incident that occurred at the Roxas Avenue night market in Davao City, Philippines, on the night of 2 September 2016, that has killed about a dozen and injured about 60.

A little before 10:30 pm, an explosive device was set off, killing ten people. The Abu Sayyaf, an Islamist extremist group notorious in the Philippines, has claimed responsibility, and warned it would only be the beginning. Davao City, once the constituency of current Philippine president Rodrigo Duterte as Mayor, has been known for safety due to his iron fist in ruling.

As such, President Duterte has declared a state of lawlessness for the entire Philippines, meaning that there will be increased security throughout, especially in more prominent and major locations.

TDY condemns this act of terrorism as contrary to the principles of Higher Purpose Through Love. Every single aspect of the deed goes against the philosophy of purpose rooted in awareness and service, especially the disruption of a society of peace and harmony, and the senseless murders of very real and unique individuals who too are along varying stages in the journey of living a truly good life.

TDY calls for a just and appropriate, yet peaceful and non-violent, response by the concerned authorities and the general public. We do not advocate retaliating by bullying, threatening, hurting, or killing others in turn, but instead show them what a truly loving and just society is all about. To bully, threaten, hurt, or kill is stooping down to their level.

Let us all pray for Davao and the Philippines. 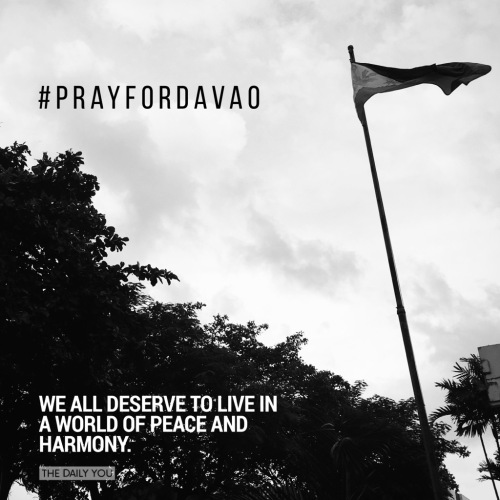 Travel sets our spirits free and allows us to find ourselves. Come in the weekend of travel, meeting new friends, and workshop on life purpose and dream boarding. Everyone's welcome! Our current venue partner is The Circle Hostel. If you have a location in mind, feel free to request it from us. #KeepWandering Learn more at http://www.stampstravel.com/be-inspired #travel #lifemap #dreamboard #goals #Baler #LaUnion #surfing #unwind #inspire
On #service. #TheMonkWhoSoldHisFerrari #RobinSharma #leadership #success #inspiration
"Who run the world? Girls." -Beyoncé To my amazing guuuurl BFF and business partner, my philosophical partner in crime, my accountability officer in our "Muni-Muni Much", "Make Basa the Bible", and "Chikas with Christ", to whom I owe a debt I can never repay... THANK YOU @lalissasingson :) Always, @aloyawakeatnight #InternationalWomensDay2017 #TDY #TrulyGoodLife #LiveTheDailyYou
High hopes on a Monday. #LiveTheDailyYou #TrulyGoodLife #inspiration #life #faith #hope #success
Love is a choice just like the other vital things in this world. Happy Valentine's Day! ❤ #LiveTheDailyYou #love #life #Valentines #inspiration
Grant that we may live out a truly good life that brings inspiration, fuels hope, and serves selflessly. Happy Sunday! #LiveTheDailyYou #Sunday #inspiration #life #live #purpose #service
If yesterday was sweet or bitter, you have the choice to either cherish or learn. You cannot live a truly good life if you are always stuck in memories. Allow the present to be the greatest day of your life so you can do more, serve more, live more. #LiveTheDailyYou #service #purpose #life #inspiration #happiness #live #motivation
Know your purpose. Never confuse people. Have a strong sense of integrity. #LiveTheDailyYou #purpose #integrity #service #honor #leadership
Where are you going? How will you get there? Why do you need to be there? #LiveTheDailyYou #Monday #purpose #inspiration #inspireD #service